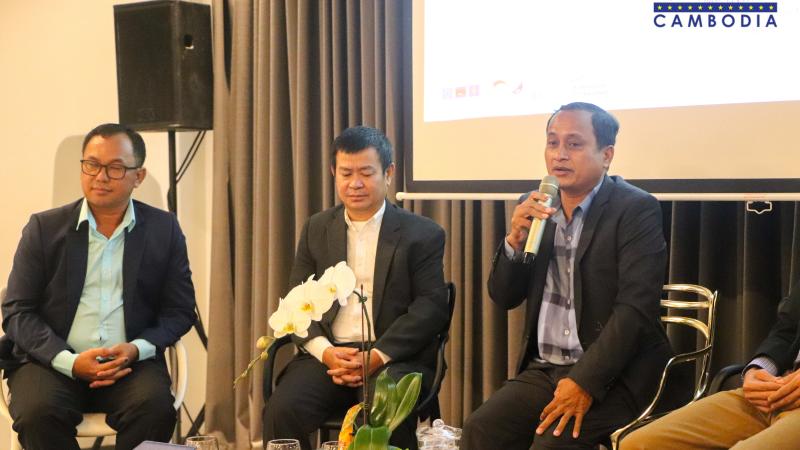 Key takeaways included the need to streamline the process of obtaining COs and related export certifications such as phytosanitary certifications, finding ways to compete with neighbouring countries on prices, and differentiating between FTAs when choosing to export.

H.E. Mr. UN Chantha, Director of the Import-Export Department at the Ministry of Commerce, started the forum by discussing the different procedures for obtaining COs that pertain to different FTAs. He said public service fees for obtaining COs for garment and footwear products ranged greatly from about $17 to over $500 depending on the forms used and the of goods. Agricultural products are not currently subject to public service fees regarding COs.

Concerning rules of origin, H.E. UN gave a rundown of the complicated RCEP procedures, where as long as a product is substantially altered to become a different product, a CO can be obtained. For example, noodles made from imported Thai flour can be considered as originating in Cambodia.

Mr. HOK Sothea, Deputy Director of the Asia-Pacific Department at the Ministry of Commerce, gave an overview of FTAs, saying that there were pros and cons to engaging in them. Pros included increased economic growth, lower government spending, and improved technology. Cons included increased job outsourcing, the potential for poor working conditions to prevail, and a degradation of natural resources.

Hok said: "When we have more FTAS, it’s a good opportunity for Cambodia, especially for investors, local and foreign. When we have more agreements, we have more market access. Before we export to countries, we need to think what is their criteria? COs and phyto certifications for example, you have to study on it. Try to strengthen our quality of product and services. Then you can compete. This is a good opportunity  that’s why Cambodia has tried to enter more FTAs."

Trade facilitation expert at ARISE + and Swisscontact Sok Kha gave an overview of National Single Window services in relation to obtaining COs. The idea, he said, is to make regulatory procedures easier, quicker, and less costly. Frequent issues he cited included exporters having to regularly submit the same information and frequently changing rules.

Van Da, the CEO of Ample Production, said costs were a major concern as a cashew nut exporter.

“Normally we pay about $250 to $300 per container," he said. "In Vietnam, they pay only $60 dollar for CO and phytosanitary certifications. This is something we want to propose to the ministry to reconsider"

He said some buyers in the West were willing to pay for goods that were sustainably produced and held COs, but most buyers, especially in Asia, were simply concerned about price points

Mr. HYM Piseth, the Deputy Managing Director at Confirel, said he had been exporting food products to Europe since 2007 and although processes had improved, there was still room for more improvement.